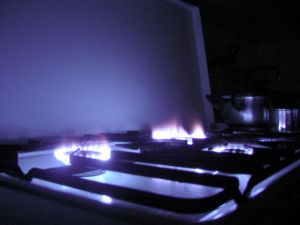 Have you ever had to tell a kid, “Don’t touch the stove.  It is hot.”?  Having two young ones myself, I know I have.  I care about my kids and don’t want them to get hurt.  I want to protect them.  Sometimes though they just don’t want to listen.  They want to fight me on everything.  I don’t like it, but there has been a time I had to just let them touch the stove.  They burned their finger, but they learned the hard way that I was trying to protect them.  They won’t ever touch the stove again.

Sometimes I feel this same way when I am teaching/coaching people at work on lean.  Someone is heading down a path of certain failure.  Failure I have personally seen many times.  I try to explain to them why the path they are taking will fail.  In the end, I have to let them experience it for themselves.  They need to travel down the path and reach failure.  In essence, let them touch the hot stove.

At first, this was very frustrating because I saw it as a waste of valuable time.  If they would have just listened, we’d be there already.

I have changed my perspective.  It isn’t a waste of time, but an invaluable experience.  The person has learned for themselves and will never forget that learning.  It has been internalized.  Also, as I am teaching/coaching this person, they become more open to my suggestions in the future.  Both of us burning our hands the same way, is like a passage into brotherhood and now we both have deeper understanding and trust in each other.

In order to be a good teacher/coach/parent, sometimes you have to let them burn their hand on the stove.  It isn’t easy because you want to protect them, but in the end they trust you more and your guidance is accepted more.

(Side Note: The hot stove is analogy.  I have never let my kids touch a hot stove.)   🙂