Balancing the Roles of an Internal Lean Consultant

For several years, I have played the role of internal consultant within four different companies.  While have the same type of role, my responsibilities have changed quite a bit.

the first two companies I was asked to execute lean tools and concepts and drive business results directly.  The influencing only occurred when the business partner had natural curiosity and wanted to learn.  My scale was heavily tipped to the “Do It” side, which at the time was great.  I was learning myself, so this allowed me to make mistakes, learn, and then correct them. 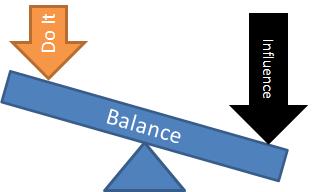 My current company would like to see a balance of the two.  As great as it sounds, I had to realize that by reading between the lines and then learn how to balance them.  It hasn’t been easy.  Sometimes the customer thinks they want a person to execute something when they really want an influencer or vice versa.  Once I learned

different parts of the company want different roles, it allowed me to be more direct and upfront.  I can now ask questions getting to the type of role the customer wants.  Once I have an understanding, I can ask directly if they want a “do it” person or an “influence” person.  Now we are setting expectations upfront before the work starts.  It has made for better results and less confusion between me and the customer.

Does anyone else struggle with this?  How do you handle it?